The first Barbie doll was sold in 1959 and was only available in the USA. This doll had very mature features and some of the parents didn’t want their children to play with them. Also, some little girls couldn’t identify with these dolls.

So Mattel launched the first Skipper – the straight legs or SL Skipper – in 1964*. Skipper dolls were sold also in Europe and Canada.

The first years Barbie and Skipper were produced, are called the “vintage years”. They range from 1959 to 1966. Some collectors also consider the years up to 1973 as “vintage”, others refer to them as “mod”.

Unlike Barbie, Skipper looked like a young teenage girl. Her eyes were blue and glanced to the right. She was produced with straight legs that do not bend and a tan skin tone. Skipper had long straight hair with bangs and was sold with three hair colors: blonde, brunette and redhead. There were some variations to these hair colors (please see chapter “HAIR COLORS”).

* "In 1964 we also introducted Skipper, Barbie's little sister. While little girls tended to perceive Barbie as being six or seven years older than themselves, they saw Skipper as close to their own age. What made Skipper so special ... was her connection to Barbie and the beauty of the doll and her accessories." ("Dream Doll - The Ruth Handler Story").

Before the SL Skipper dolls were mass produced some test market Skippers were sold (and/or handed out to Mattel employees). These dolls are slightly different from the "mass production" dolls. For reference please see chapter "Sample/Test market dolls":

They were sold in a cardboard box with a liner, golden or black brass wire stand, booklet, white comb and brush and wore a red and white swimsuit and red shoes (marked Japan).

Skipper also came with a gold brass headband which often caused the dolls' head to turn green because of oxidation.

In winter 2018 some straight leg Skipper dolls with regular hair colours sold on eb.. for 200 - 250 US $ in their boxes (some with wrist-tag, some with liner, but not all of them).

Why was this doll named Skipper?

According to Ruth Handler ("Dream Doll -The Ruth Handler Story"), this doll was named "Skipper", because: "Incidentally, we gave Skipper (and her soon-to-be-introduced friend Skooter) their names because cute nicknames were in vogue in the mid-1960s, thanks to television shows like 'Gidget', which starred Sally Field."

however she was produced

all of these are hard to find

Some more dressed dolls in their boxes were available covering fashions from #1910 - #1922.

You can find more detailed information and lots of photographs on the following page:

Skipper was smaller than Barbie and needed her own wardrobe. However, the first outfits created for her match some of the early Barbie outfits. Lateron, Mattel designed a stand-alone wardrobe for her. Just like Barbies wardrobe, Skippers outfits were made in a very good quality with many details and came with precious small items like flower bouqets, handbags, gloves, socks, caps, jumping ropes, jojos, birthday cakes and candles, etc.

For detailed information on the 60s and 70s Skipper fashions please go to the FASHIONS OVERVIEW:

You can find all of the regular vintage and mod Skipper outfits as well as many rare variations or production samples, on the these pages:

For a list of matching/coordinating fashions of Skipper and her family members, please klick here:

Five gift sets with a or for a SL Skipper were available:

In Japan, the U.S. issue Skipper was also available. Additionally, the Japanese Skippers # S950 were sold from 1964 until around 1966. These dolls had dark brown eyes that glance to the left. They came in dressed boxes also. They are extremely rare and probably the most expensive SL Skipper dolls to be found on the market.

For more information on these dolls please press the button:

In 1965 the regular tan SL Skipper was produced with new markings:  © 1963 Mattel, Inc.  all other features remained the same. Mattel needed to change the markings because in 1965 they introduced Skipper's friends Ricky and Skooter, which had the same body as Skipper. They all have the same markings. Unlike the Skipper dolls produced prior to that change, these dolls tend to discolour and they usually have faded lips - just like the Skooter and Ricky dolls of that time. Some of the 1965 Skipper dolls were produced with almost black ("raven") hair. Pink skin SL Skippers were sold starting 1966 (please see chapter below).

Some Skipper dolls with the old markings Skipper © 1963 Mattel, Inc  were sold simultaneously - probably until 1966.

In dealer catalogs, dealers were offered cartons with (usually 12) Skipper dolls. This 1965 DUNHAM, CARRIGAN & HAYDEN catalog shows "Standard Skipper" (Straight Legs Skipper), Skipper (Bendable Legs Skipper), Ricky and Skooter, each of them cost 3 US $, except for the Bendleg Skipper, which was 4 US $ per doll:

In the second half of 1966 until 1968 SL Skipper dolls were manufactured with a pink skin tone also. These dolls are rare.

For more info on this doll please go to the page "Reissue Skipper" by pressing the button below.

She had straight legs and a body with a twist and turn waist. Her eyes look much like the eyes of the Reissue Skipper dolls. The hair fibers were different though, and the hair can often be found in a layered style.

This doll is very hard to find, and so is her swimsuit.

For more information on this doll please click on the following button:

European Skippers were the last Skipper dolls which were produced with the early SL Skipper head mold AND side-glance. All future Skippers had centered eyes.

Many collectors are confused and don't quite know how to find out whether they have found a "Pink Skin Straight Leg Skipper", a "Re-Issue Skipper" or an "European Skipper". Let's start with the eyes:

If you have a doll with eyes like the tan SL Skipper dolls, but her face and body are pinkish, you have a "Pink Skin Straight Leg Skipper":

If your doll looks like this, it's a Pink Skin SL Skipper. (Black eyeliner only on top only).

If your doll looks like this, she could be a Re-Issue or European Skipper. (Black eyeliner also on the inner corners of the eyes). 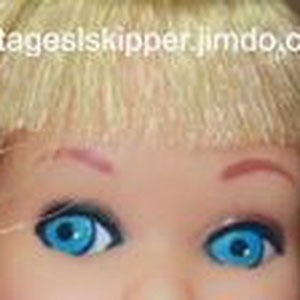 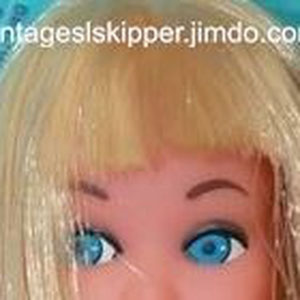 The doll on the left is a Re-Issue Skipper. Her hair resembles the hair of the vintage SL Skipper dolls. Her body markings are: © 1963 Mattel, Inc.

The doll on the right is a European Skipper. Her facial colour is very pink, her hair looks more synthetic than the vintage SL Skipper's hair. Her bangs tend to part in the middle. Many of these dolls have very long and layered hair. About half of these dolls have a factory flaw: One of their legs is longer than the other leg. Other than the pink skin SL Skipper and the Re-Issue Skipper, her face doesn't tend to discolor. She has straight legs and a twist and turn waist. Also, her body markings are different: © 1967 Mattel Inc. U.S. Pat'd. U.S. Pats. Pend. Made in Taiwan

If you've got a doll with red/titian hair, she can only be a pink skin or re-issue Skipper, since the European Skipper dolls were only produced in blonde and brunette.