In 1965 Skipper was sold with bendable legs as well. Except for that, she resembled the SL Skipper - like her, she had a tan skin tone and no blush.

This doll came with a new - pink - box and swimsuit, as well as with a wire stand, booklet, headband and a white brush and comb. One of these dolls in good condition in her original box sold on eb.. for 185 US $ in November 2018.

Starting 1966, the BL Skipper was sold in a tan or pink skin tone. In Germany and maybe the rest of Europe, these dolls were probably only introduced in 1967: They are first offered with their stock number in the 1967 German Barbie booklet (where a pink skin BL Skipper is shown). The 1966 booklet only offers the SL Skipper #0950 and Skooter #1040, however, the dolls showing the outfits available were partly bendable legs dolls!

Bendable legs Skipper dolls were only available in the US until the End of 1967. In Germany, some pink skin BL Skippers with Re-Issue heads have been found, which must have been sold in 1970 and/or 1971 though. (pls. see the following chapter).

Pink skin BL Skippers are hard to find, and even harder to find in a good condition. Usually they have faded or discolored faces, lips and arms. They come with blush. A high color pink skin BL Skipper in medium condition sold on eb.. for 226 US $ in October 2018 (doll and original swimsuit only - no box).

Since the BL Skipper's legs are made of a softer material than the SL Skipper's legs, they are prone to staining and often have pin pricks or chewmarks. (You can find a picture of a pink skin BL Skipper doll if you scroll down the page)

BL Skippers in general are hard to find with unfaded lips and original lip paint.

The feet of the BL Skippers also have markings. Most are marked Japan, but there are also dolls with "U.S.A." markings - and a few don't have markings at all.

BL Skipper dolls were sold in boxes stating the regular hair colors "blonde", "brunette" and "titian", but there are Tan BL Skippers with unusual hair colors as well, just like the first issue Straight Leg Skippers. For more info on the hair colors, please go to the bottom of the following page:

A brunette tan BL Skipper in medium condition with box, accessories and wrist tag sold for 250 US $ in March 2019.

A brunette tan BL Skipper with original swimsuit and shoes in medium condition sold on eb.. for 123 US $ in April 2019.

Notice the different markings: "Japan" and "USA". The feet with "USA" markings don't show toes when

looking at them from below. Pictured below is a BL Skipper with no markings on her feet at all:

In Eaton's of Canada's 1966 winter catalogue a Bendable Legs Skipper doll is advertised together with six extra outfits.

You can read more on the following page:

In 1967, the Bendable Leg Skipper doll was available in a new box. This box was lime green, had no lid and showed some of Skipper's mod fashions on the sides. Instead of a wire stand a clear plastic "mod" x stand was sold with this very rare box that is almost impossible to find.  Most of the dolls sold in these boxes are pink skin Skippers, however, there are some tan Skippers also. BL Skipper dolls were sold in the U.S.A. only until the End of 1967, but you can find some later ones in Europe - all pink skin.

These dolls weren't pictured in any booklets of these years, but maybe some remainders of the dolls produced for the US market, which hadn't been sold in 1967, were still for sale on the European market.

Some Pink Skin BL Skipper dolls (some in their original green boxes) were found in Germany - with eyes of the Re-Issue Skipper dolls! They are not pictured in any German catalog, but there's a 1971 booklet offering the Bendable Legs Skooter doll. It is likely these BL Skipper dolls were also sold that year, maybe even already in 1970. The dolls found with the heads of Reissue Skipper dolls available in 1970/71 speak for that. I was lucky to see a NRFB example of these dolls some years ago. It's possible Mattel used up left over dolls from the US - or left over bodies in 1970/71 with Re-Issue Skipper doll heads - in Europe. That's probably also the reason why Mattel offered BL Skooter in Germany again in the year 1971.

Right: The brunette Pink Skin BL Skipper pictured is definitely one of the rarest early 70s Barbie family dolls: She comes with eyeliner like the Reissue Skipper dolls sold in 1970/71. This doll came to me from the original owner who only had this one Skipper doll as a child. Found in Germany. 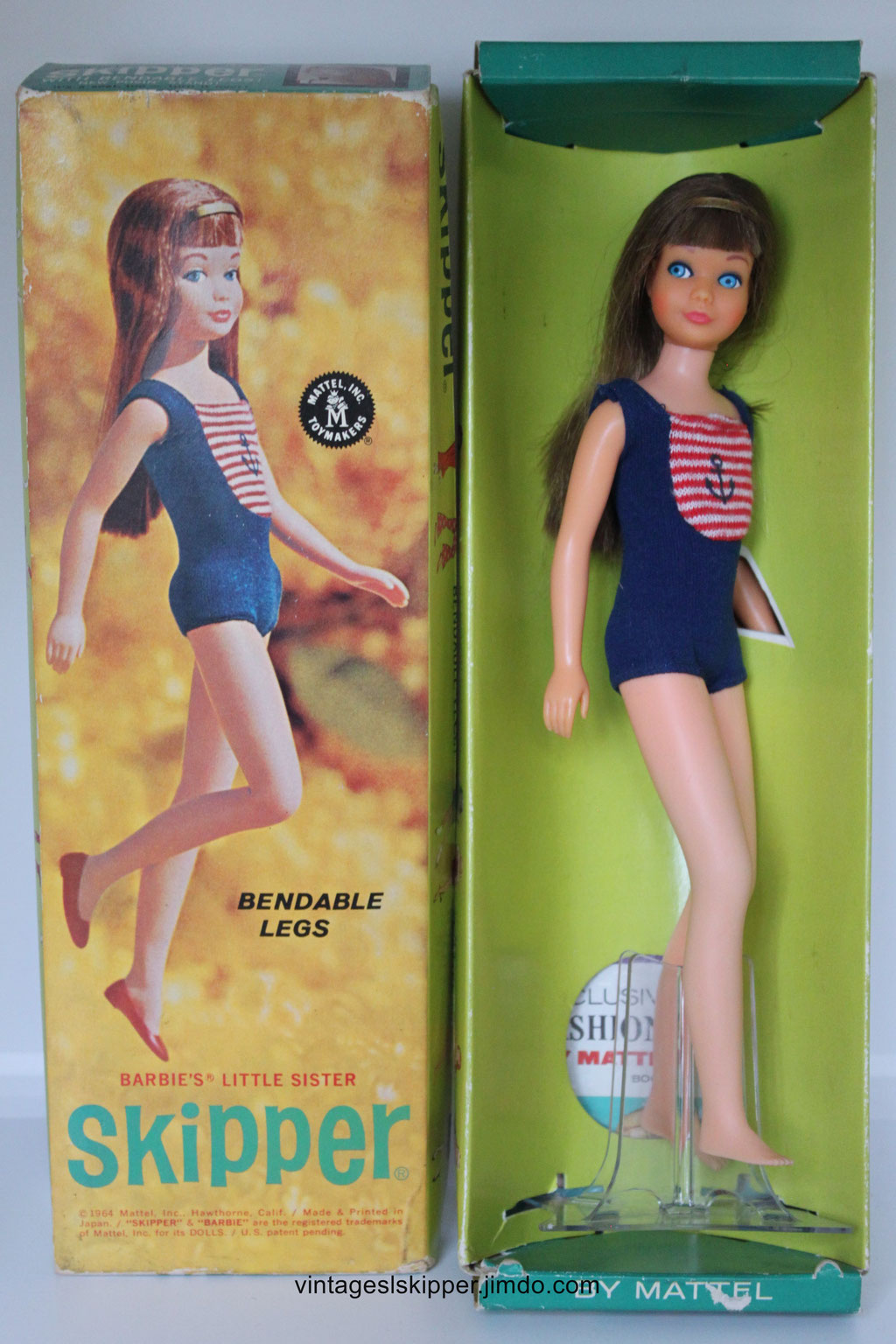 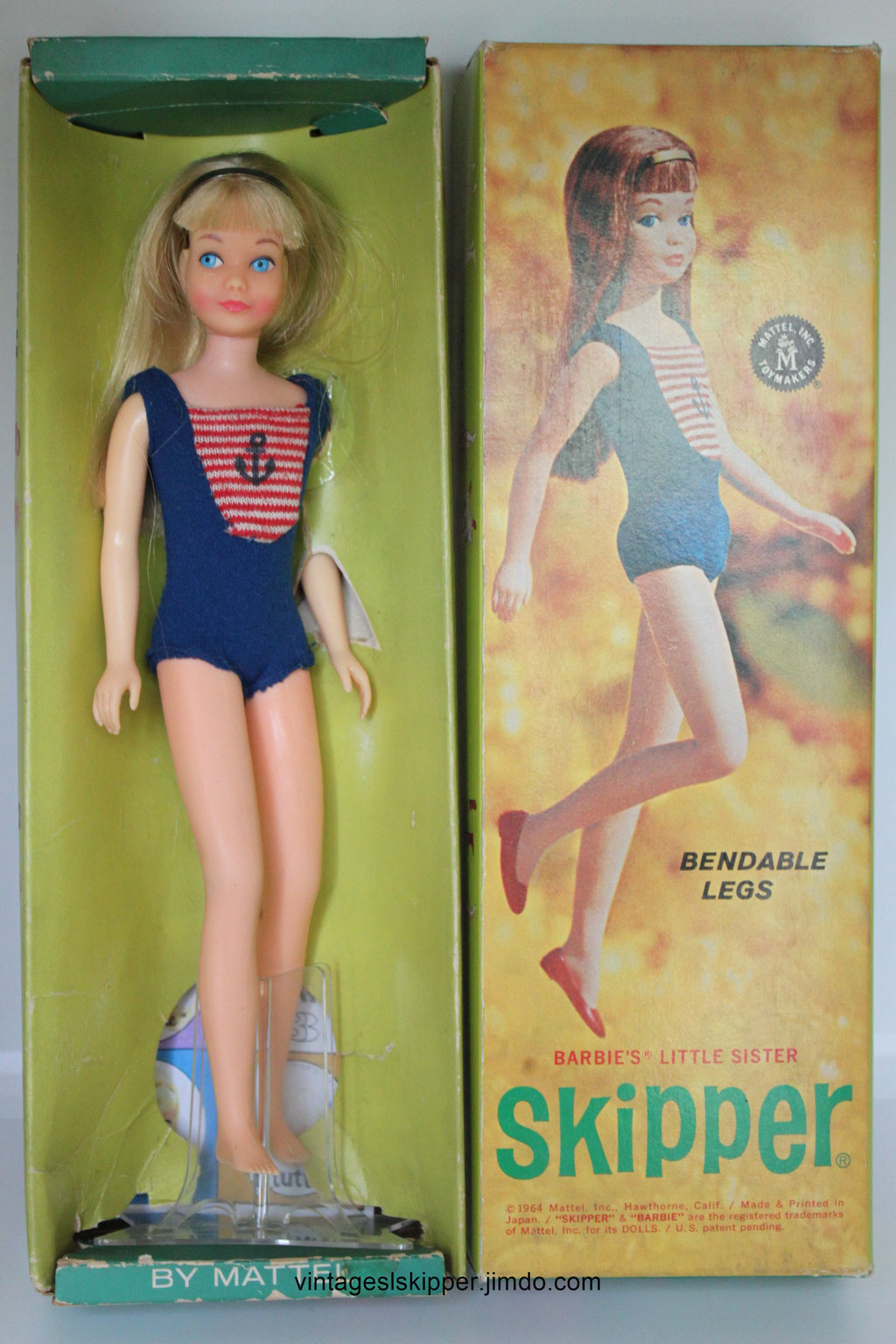 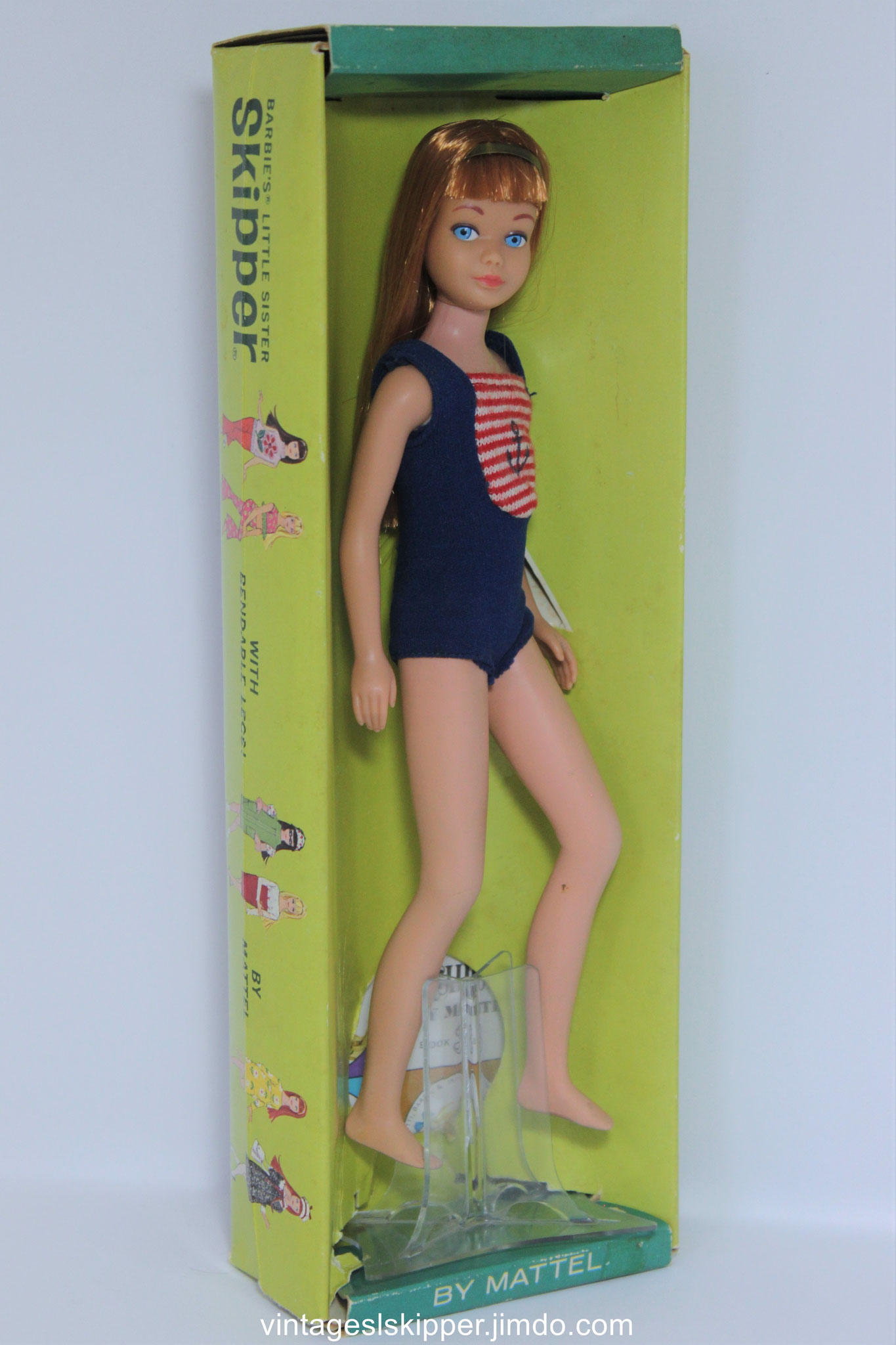 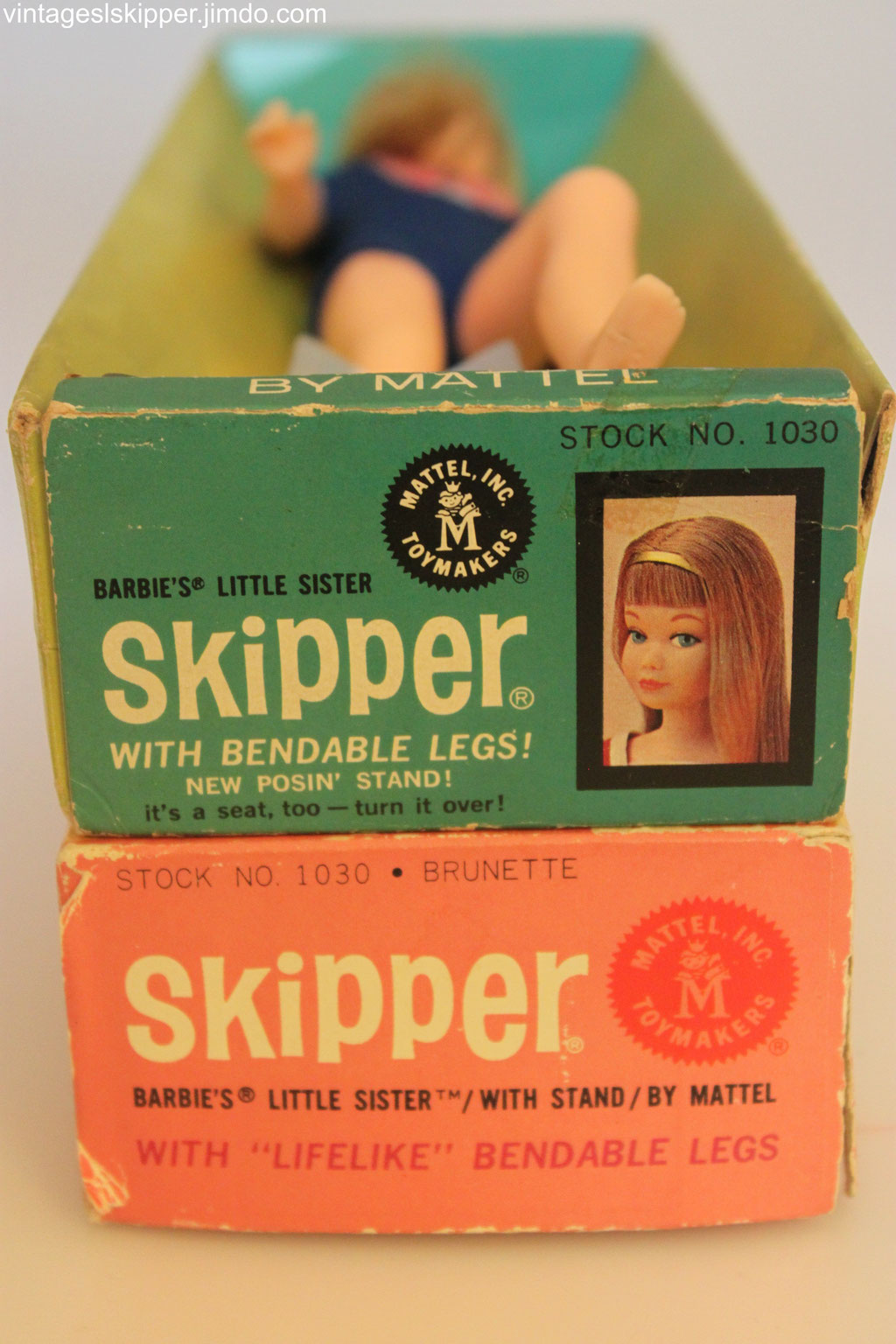 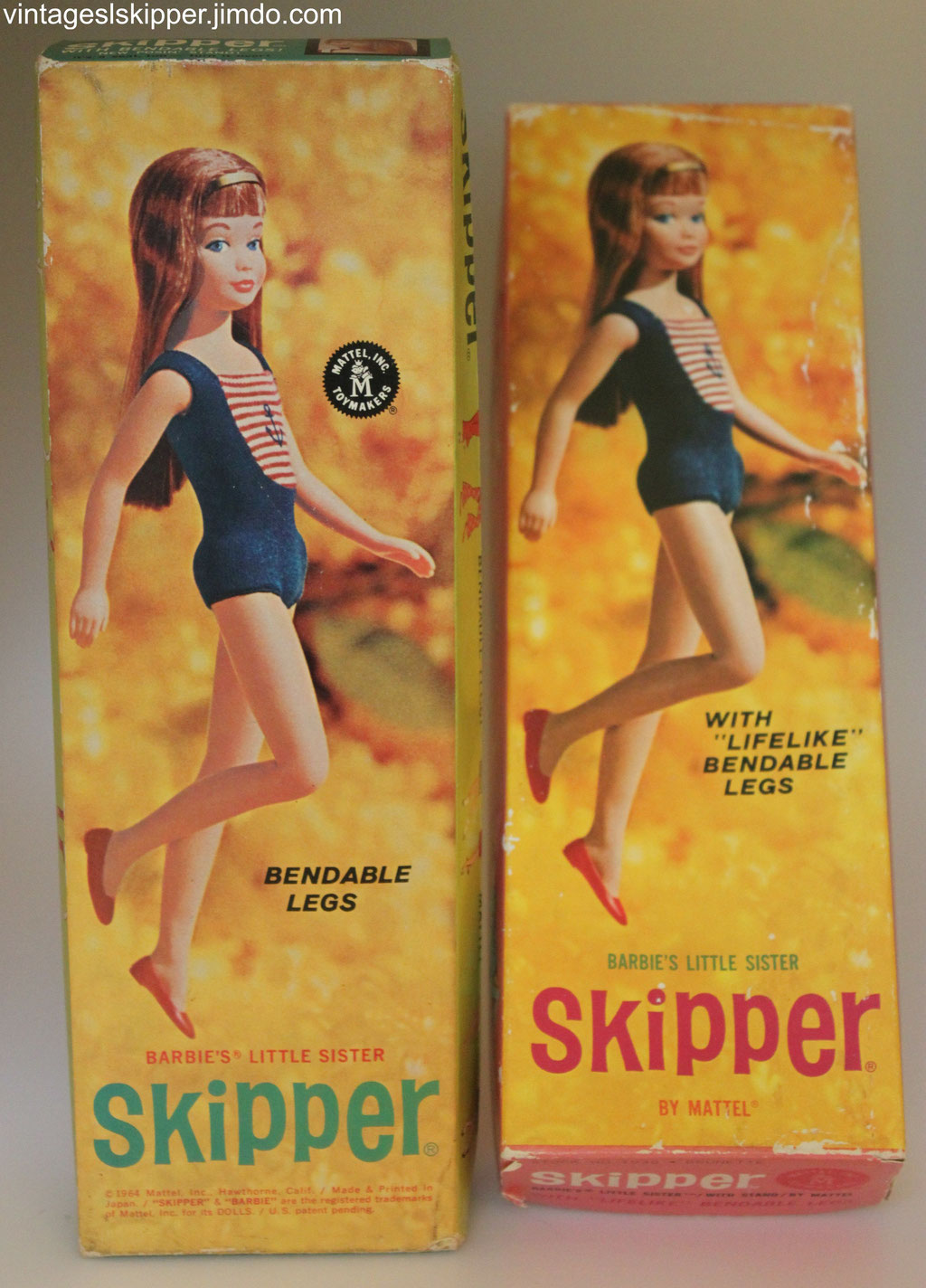 There were two gift sets with a Bendable Leg Skipper:

For more information on these sets please click on the link below: