During the last decades some SL Skippers were found which differ from the SL dolls sold in 1964 and 1965. These Skippers are often being referred to as “Sample dolls” or "Prototypes" I call them “Test-market” dolls, because they definitely were neither Sample dolls nor Prototypes. They came in the regular boxes and had the basic hair colors. A very small number was sold as "Dressed Dolls" (pls. see chapter "Dressed Doll Boxes). Doll markings: Skipper © 1963 Mattel, Inc.

These dolls are much rarer than the later Skipper dolls, but not as rare as they would be if they indeed were sample dolls, and for sure they aren't prototypes. Without much doubt though these dolls were the first Skipper dolls ever produced in small numbers. For a long time it was assumed, that they were handed out to Mattel employees only, prior to mass production. This must have been in 1963. But some of them definitely were also sold in stores to the public - in the same box and with the same accessories like the regular issue. I once met a German lady who showed me her Test Market doll and told me that her father got her from the New York Toy Fair in 1963. I couldn't find any proof for this though. In the meantime, I talked to another original owner of a Test Market doll who also thinks she got her doll in 1963.

In the “Miller’s” Magazine (October/November 1994)[1] there's an article in which author states that she had seen a photograph of a Skipper prototype doll with the same leg mold and no marking on the feet.

Almost certainly Mattel did some market research on Skipper dolls as well before mass producing them. Maybe the girls interviewed found the very first issue too plump, and found that their legs were too short and looked chubby due to the wide stance. So the legs were altered before mass production.

What differentiates the “Test Market Skippers” from the regular Skipper dolls?

Following you can find pictures and some additional information about Test Market dolls as well as info about Prototype and Sample dolls, Salesman Sample dolls, ...

[2] Published in “Barbie Bazaar” May/June 1997, article by A. Glenn Mandeville

A prototype is a unique doll sculptured of carved plaster and covered with wax. The face is hand painted. All later forms (for example for production sample dolls) are made of imprints of this form. A prototype doll doesn’t have markings on the body or feet. The Skipper doll with centered (hand painted) eyes shown in the first Skipper commercial from 1964 (shown further below) is a prototype doll.

An African American Prototype Skipper doll was made in the 60s, but unfortunately the doll was never chosen for production. This doll has the same body - and most of the facial features of a regular Skipper. However, her mouth is sculptured like Skooter's! Her skin tone is brown. She has dark brown eyes and black, short, thick hair.  Like the doll shown in the first Skipper commercial , her eyes are centered. She is dressed in a prototype bathing suit with red panties and an attached, red and white striped top with a red bow.

This doll was displayed at the 1986 Barbie Convention in Phoenix, Arizona (pls. see above and below pics). Photographs courtesy of M.M.

This "Black Skipper" is pictured in ‘The Collectors Encyclopedia of Barbie Dolls and Collectibles’ (2 versions of this book).

Eventually, in 1989, the first  African American  Skipper was actually launched on the market - the AA Homecoming Queen Skipper #2390. She was made in China and had a 1987 “Teen Fun Skipper” body and head mold

Just like above prototype of a "Black Skipper", Mattel had produced prototypes for the regular Skipper doll (number unknown). You can see a Prototype Skipper doll in the first Skipper commercial, 1964. Please note the centered eyes:

In an advertisement in the May 1964 issue of "Playthings" - which was a toy dealer magazine that was founded in 1902 and was published monthly until 2010 - you can see a portrait of a prototype Skipper doll with centered eyes:

After choosing a prototype, sample dolls made of resin (or vinyl) are modeled from imprints of this form. These casts are hand painted differently, diverse hair styles are tested. One of these casts is then being selected for mass production. Also, some doll heads of the regular line could have been used to try out new hairstyles or make-up. The doll with ruby red hair pictured further below is most likely such a Sample doll.

These are dolls produced in small numbers and launched on the market in order to learn more about the acceptance by the consumers. Some features of these dolls may be altered prior to mass production.

In the last decades, a handful of Skipper dolls have been found with very long bangs. Some of them on Test Market doll bodies, some on later bodies.  Some dolls have a row of very long bangs over very short bangs. Their head is not marked on the inner rim (please see chapter “Head marking”).

Since there is no documentation on these heads and dolls, we can only make assumptions on why they were created this way. Maybe these heads were part of the process to determine how the mass production issue should look like. For sure, Mattel tried different hair styles on the dolls before deciding on the final one. This would make these heads production samples.

It is assumed that Mattel first decided on the head mold they would use for mass production and then developed hair styles on the first heads produced from the final head mold. Perhaps a better term for these heads with the very long bangs would be “Test Market” heads. It’s also possible these heads were used on Salesman Sample dolls. Since Mattel is known for not wasting any doll parts, the heads might have been sold to the public on bodies used in later times. This would explain why they were found on different bodies. 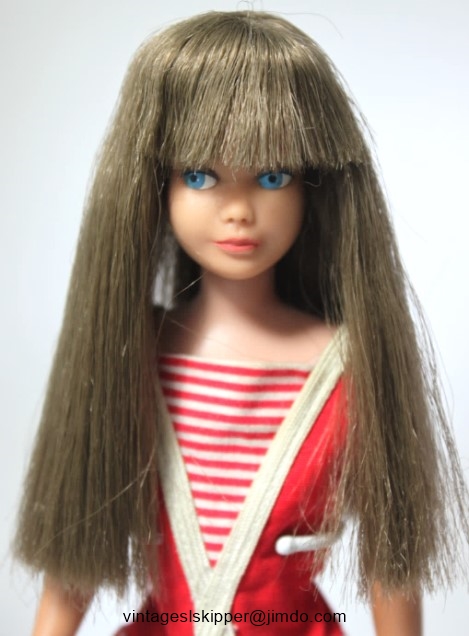 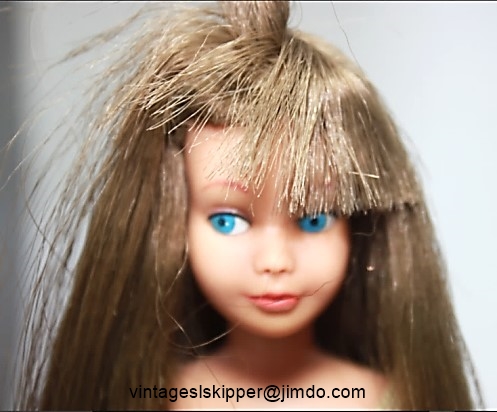 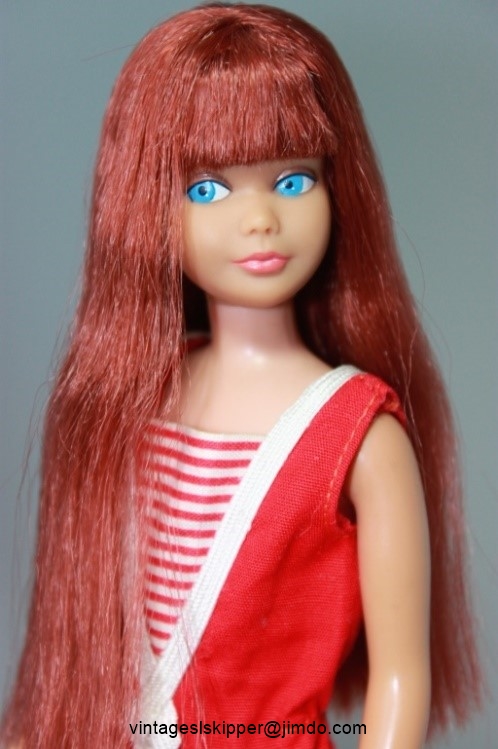 You can find Test Market dolls with brunette, titian and blonde hair. There are no test market dolls with lemon blonde or other special hair colours, except maybe two-tone Skippers with beige eyebrows or the auburn colour magic Skipper dolls. "Maybe", because I personally haven't found any of these, but I know some collectors who state they do own one. Since the color magic heads and the two-tone heads (the ones with the beige eyebrows) - don’t have head markings, it might be possible they were produced at the same time the test market dolls were produced and maybe used on them. But it's also possible some little girls had switched heads ... For more information on head markings or hair colors please go to the subject pages:

Here you can see the

Notice the difference in size

as well as the wider stance of

The lines show where the width of the feet was measured (pls. see above explanation).

The first three girls all have the same width: approx. 1.42 inches. The Skipper to the right has an extra wide stance of 1.81 inches.

On this picture you can see a regular Skipper compared to two Test Market dolls.

As you can notice, the doll in the middle has a wide stance, but the feet of the one to the right are even further apart.

There are obviously at least two kinds of Test Market dolls. The one in the middle is the kind you see more often. Her feet are approx. 1.42 inches apart. The one on the right, which is the rarer kind, has feet that are approx. 1.81 inches apart (measured at the outer side of the feet).

There are also differences in how the eyes and eyebrows of the dolls are painted, and there are differences in the thickness of hair and lenghts of the bangs.