Please note: The information below - especially on Japanese pink and tan skin Skippers/dressed box Skippers and Japanese Skipper doll clones - derives from my own independent research and most of it has not been published in any form before. Like all parts of this website no part of this information - neither written information nor photographs - may be reproduced, stored in any retrieval system, or transmitted in any form, or by any means including but not limited to electronic, mechanical, photocopy, recording or otherwise, without my written consent. You are entitled to use the information for your private, non-commercial use only. If you want to use the info on your book/website/etc. PLEASE CONTACT ME PRIOR TO USE!

Above you can see the cover page of the Japanese Barbie booklet in which the Japanese Skipper is pictured. It was produced by Kokusai Boeki Kaisha Ltd, a Japanese company founded in 1937, which is specialized in goods and services importing and exporting. They also produced the early fashion booklets included in boxes and packaging for Mattel’s dolls and fashion outfits available in the rest of the world. Mattel went into business with Kokusai Boeki Kaisha in 1957.

In Japan, not only the Japanese version of Skipper was sold, but also the regular version. Here is an overview of Skipper (and her friends) available in Japan:

- U.S. Skooter (a Skooter dressed doll box has been found)

The regular Skipper version's boxes were the same like in the U.S. (described on the page "Straight Leg SL Skipper ..."), except for the sticker attached to the bottom of the box with the KB (Kokusai Boeki) label, a pat. number, and the number of the fashion enclosed on it. You can find more info on the dressed doll boxes above.

Skooter and Ricky also had a sticker attached to their boxes (probably also the regular Skipper box with Skipper in her OSS), which state their production numbers (# 1040 for Skooter, #1090 for Ricky). 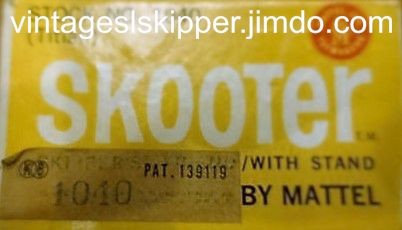 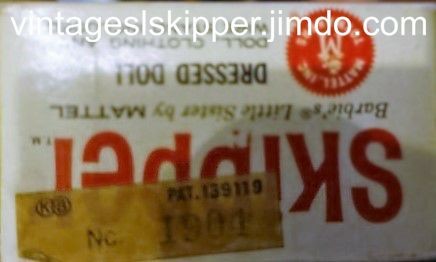 P.S. The U.S. Skipper version was available in every country where the first Skipper dolls were sold (like in Germany, Great Britain, France, Canada, ....).

But there are also "tan" Skippers (extremely rare). Some tan skin Skippers  seem to have hand painted eyes/eyelashes.

Almost all Japanese Skippers have "green" around the hair line, which was caused by the headbands (oxidation). This does not deduct from their value.

Japanese Skippers were sold in the three basic hair colors: "Redhead", "Brunette" and "Blonde" and were available for 600 Yen. (Possibly they came in the same boxes like the regular SL Skipper dolls, maybe without the addition of a tariff sticker at the bottom of the box. In fact, I've never found (and never have seen a photograph of) a non-dressed-box-Japanese-Skipper with a box. Could it be possible they weren't sold in boxes at all? It's also possible they were sold with the regular Skipper stands instead of the super rare black stand that came with the dressed box Skippers and which was pictured in the booklets.) Update 2019/10: Thanks to a fellow collector it looks like the mystery of the "non-dressed-box Japanese Skippers" has been solved: Marco owns a Japanese Skipper that came in a regular Skipper box which has a sticker with a Japanese writing on it - on one short end of the lid. It is a choking hazard warning.  Also, there's a black certification sticker attached to the bottom of the box, on the inside. The box came with a liner and all the regular accessories - including the regular Skipper stand - not the black round stand sold with the Japanese dressed box dolls. Also enclosed was the Japanese Barbie booklet that also came with the dressed box dolls. Of course, since the item isn't NRFB (never removed from box), there's no 100 % proof of the authenticity, but I'm quite sure it's genuine. You can find photographs below.

Skooter Boxes that were sold in Japan hat stickers stating Skooters stock number, so it's likely Skipper's boxes had those as well. Either in addition to the sticker mentioned above or instead of ...

These dolls are extremely rare and probably the most expensive SL Skipper dolls to be found on the market. Even Japanese Skipper in medium condition are saught after by collectors and are sold at a high price.

In 2018 Pink Skin Japanese Skipper dolls in medium condition (all except one with green, all with faded or touched-up lips, all with discoloured heads and arms) sold between 350 and 475 US $.

Pink Skin Japanese Skipper in her box. The sticker on the box lid with the japanese letters is a choking hazard warning! The black sticker inside the box isn't a "tariff sticker", but a certification sticker of utility model right by Japan Soft Vinyl Industry Association. It is pictured upside down. the numbers are patent numbers. (Thanks to my fellow collectors with Japanese roots who helped with the translation!!!) 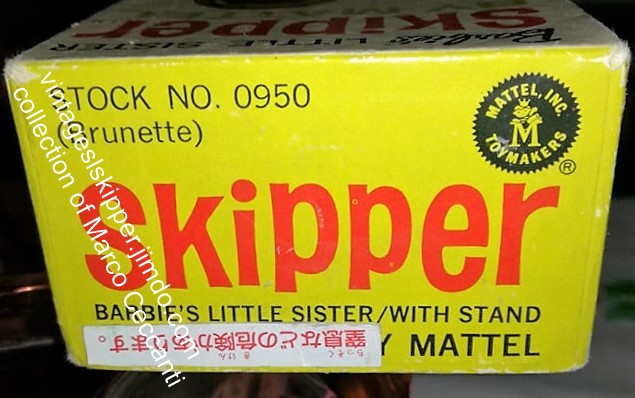 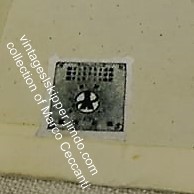 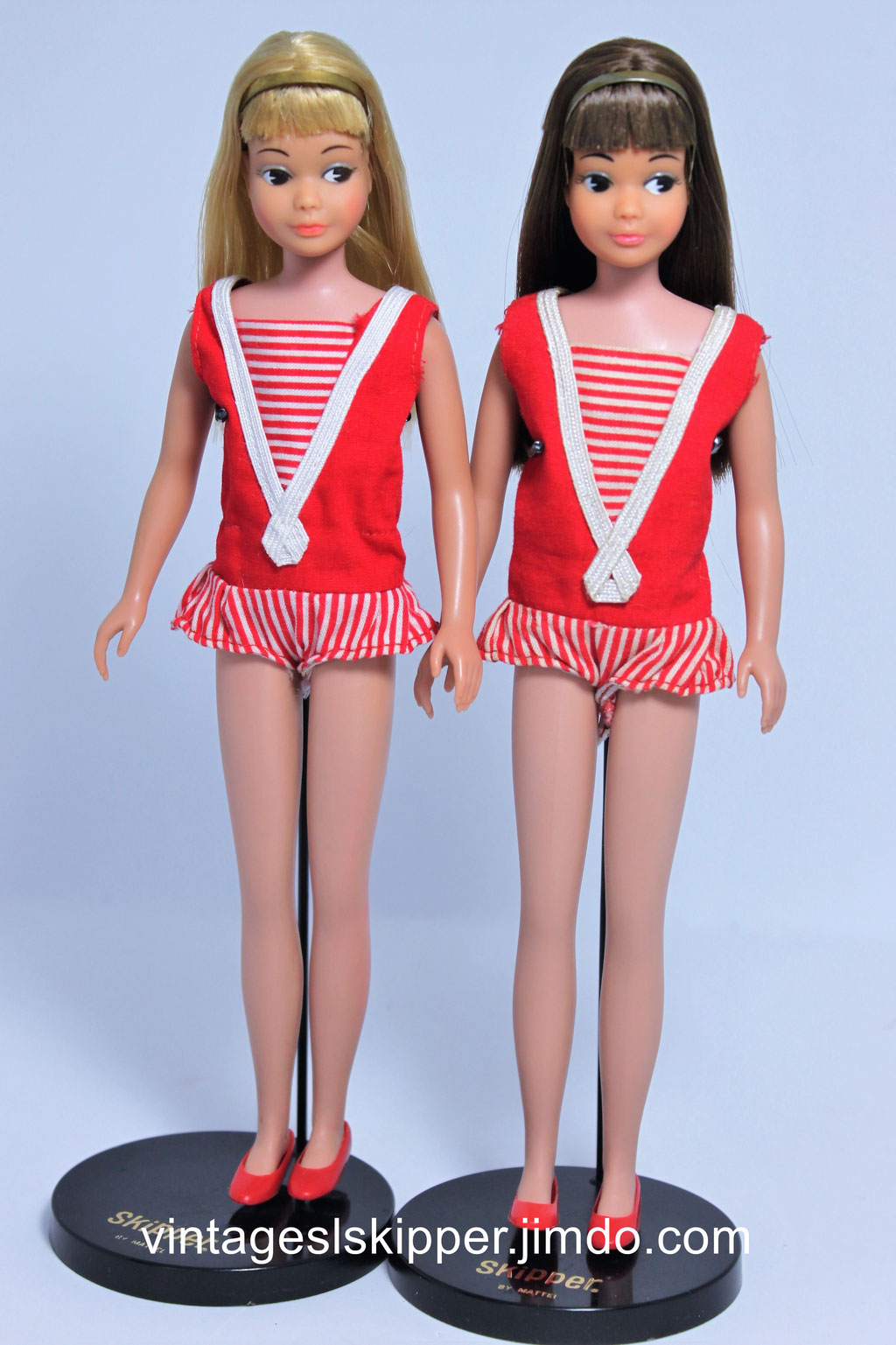 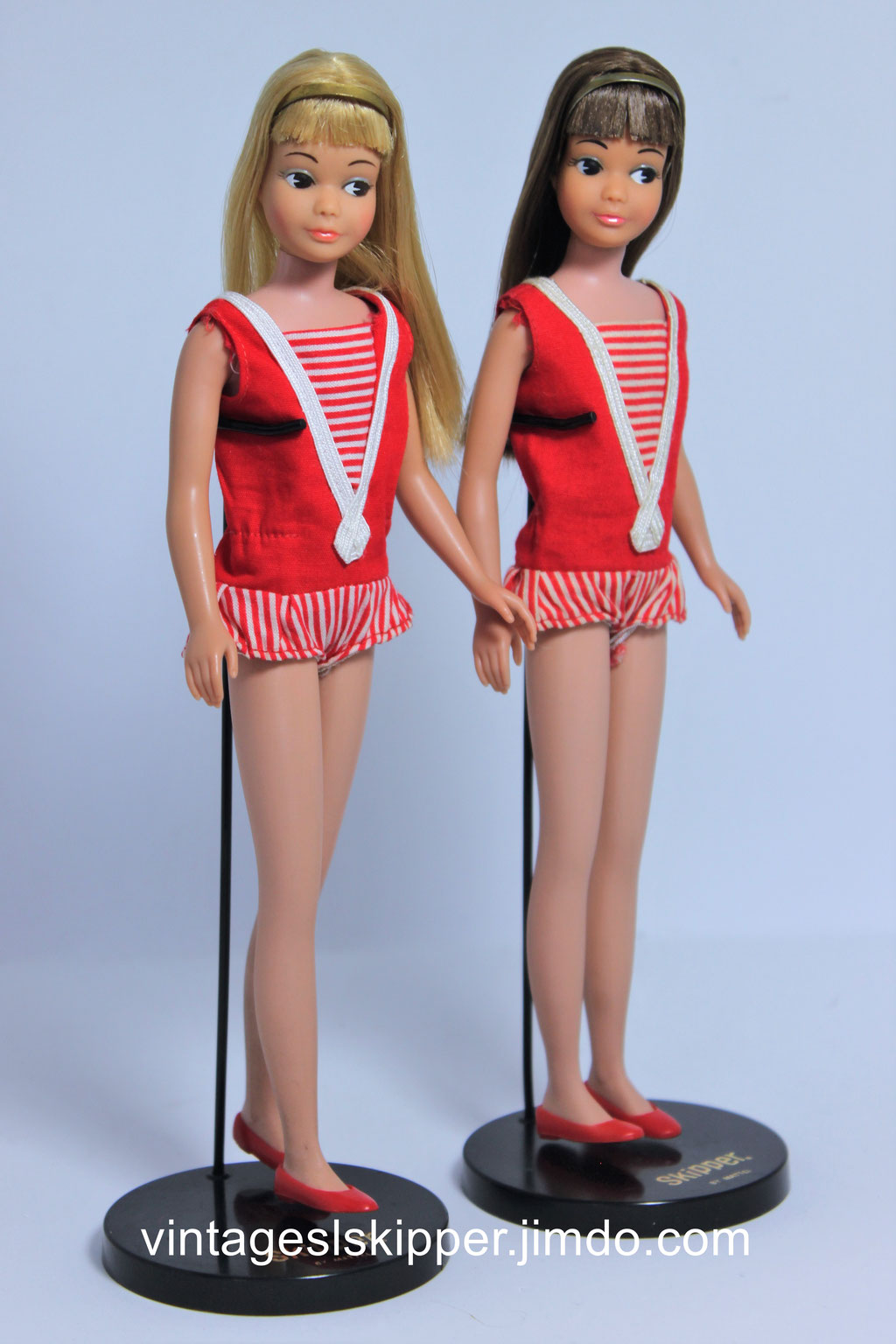 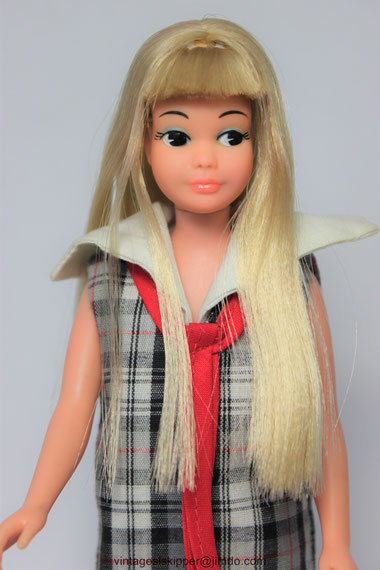 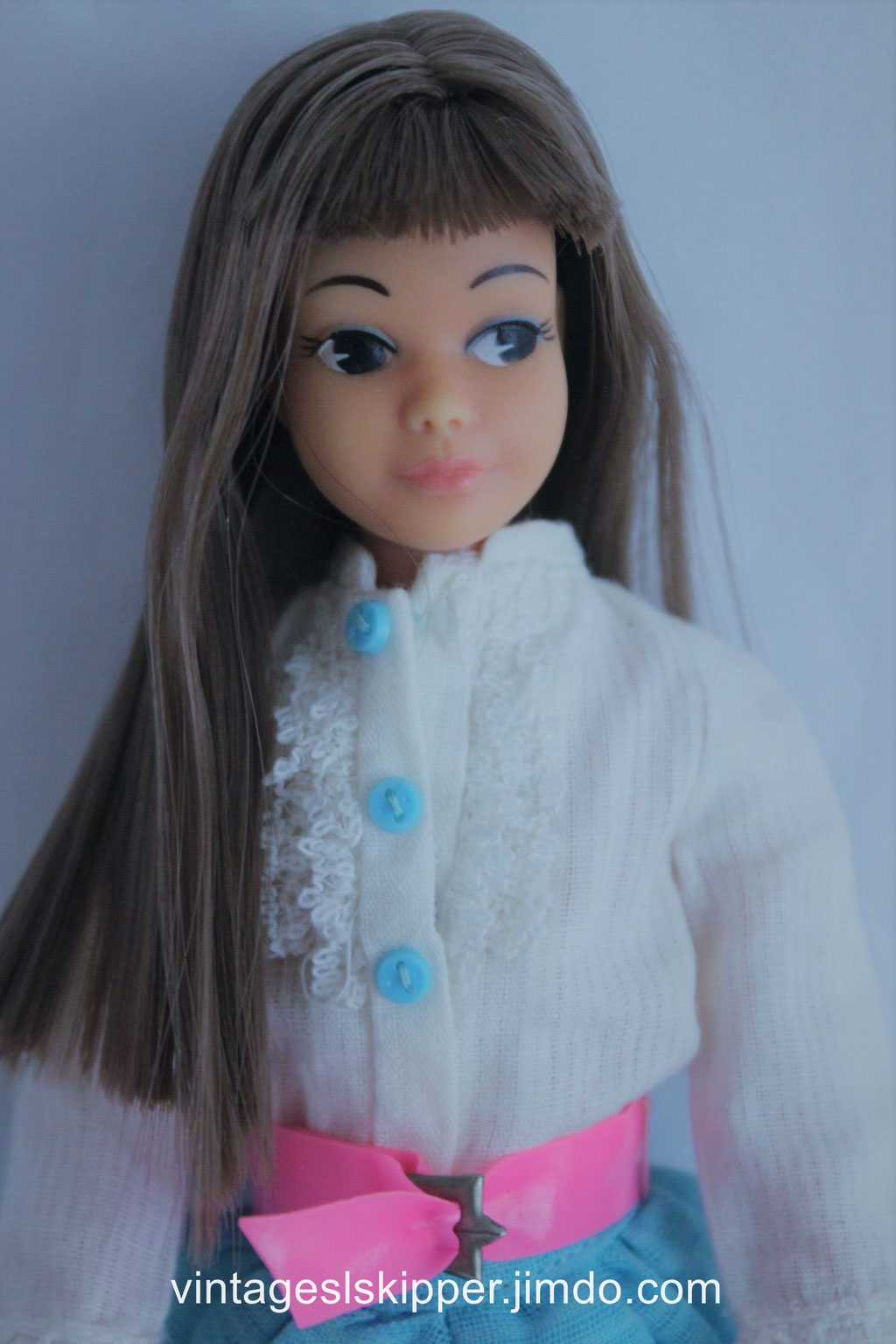 From 1964 until 1966  Japanese Skippers were also available in “Dressed Doll Boxes”. The dolls in these boxes usually came with tan skin (doll markings:  Skipper © 1963 Mattel, Inc.)  and with some (maybe all) of the regular outfits available for Skipper in the first two years. You can find a few pink skin Japanese Dressed Dolls (doll markings: © 1963 Mattel, Inc.) wearing outfits available in 1966 (like, for example: Dream Time). In addition to the regular outfits, a dressed doll box with a tan Skipper wearing a kimono was availabe. The dressed dolls were sold for 700 Yen (regular Japanese Skippers in their red and white OSS: 600 Yen).

The stock number 0950 and boxes were the same as the regular Skipper boxes (except for the sticker on the bottom of the box with the number of the outfit enclosed and a certification sticker attached to the inside of the box bottom), but they differed from the dressed boxes sold in the US. (You can find more info on the U.S. market dressed doll boxes in chapter "Straight Leg Skipper #0950 ...").

The boxes came with liners. Unlike the US version dressed dolls, the dolls were not sewn into the boxes. The booklet enclosed was made for the Japanese market. The bottom of the black wire stand that came with that box was round and had a gold “Skipper” print on it.

The boxes of my tan skin Japanese Dressed Dolls have blue certification stickers, the ones with pink skin dolls green ones. Maybe it's just a coincidence. 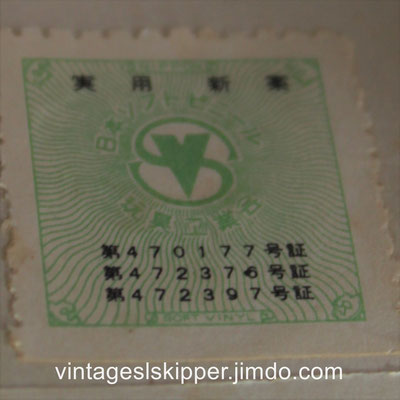 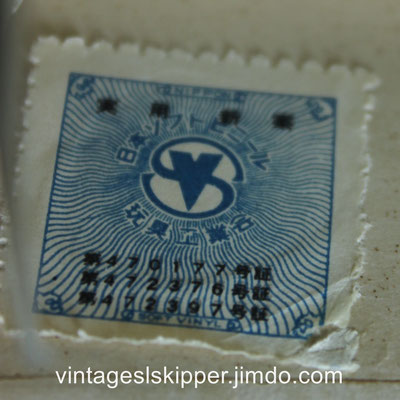 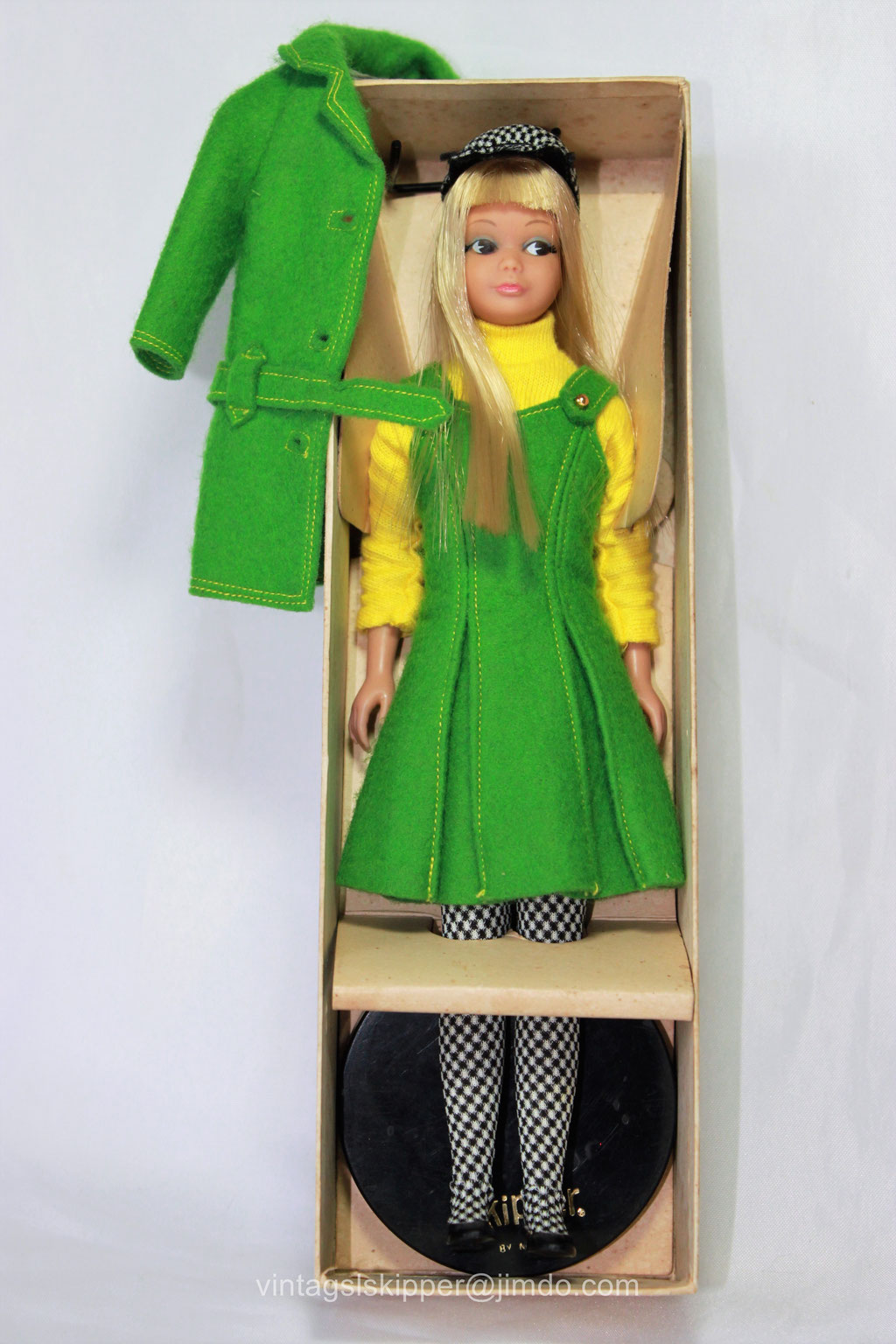 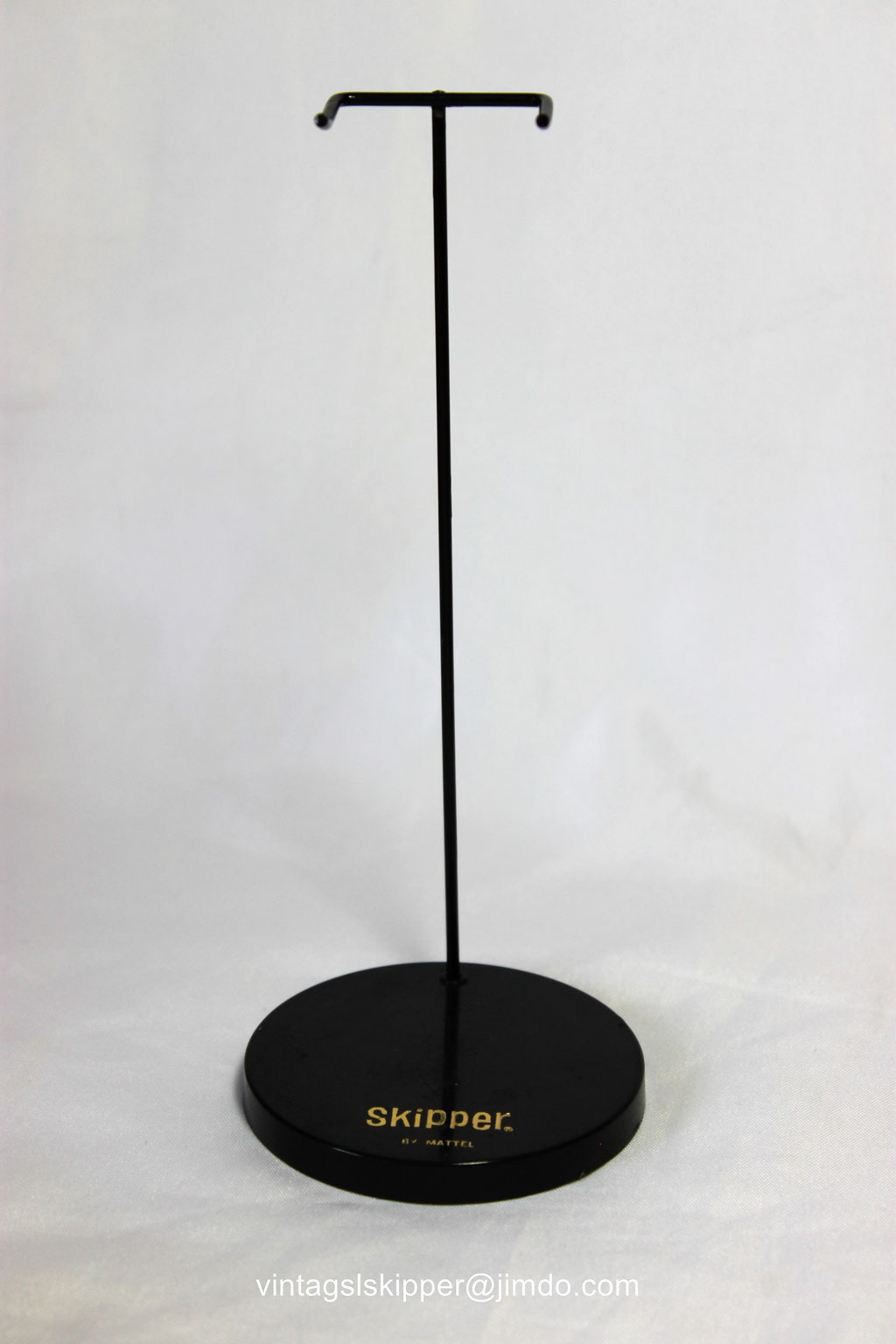 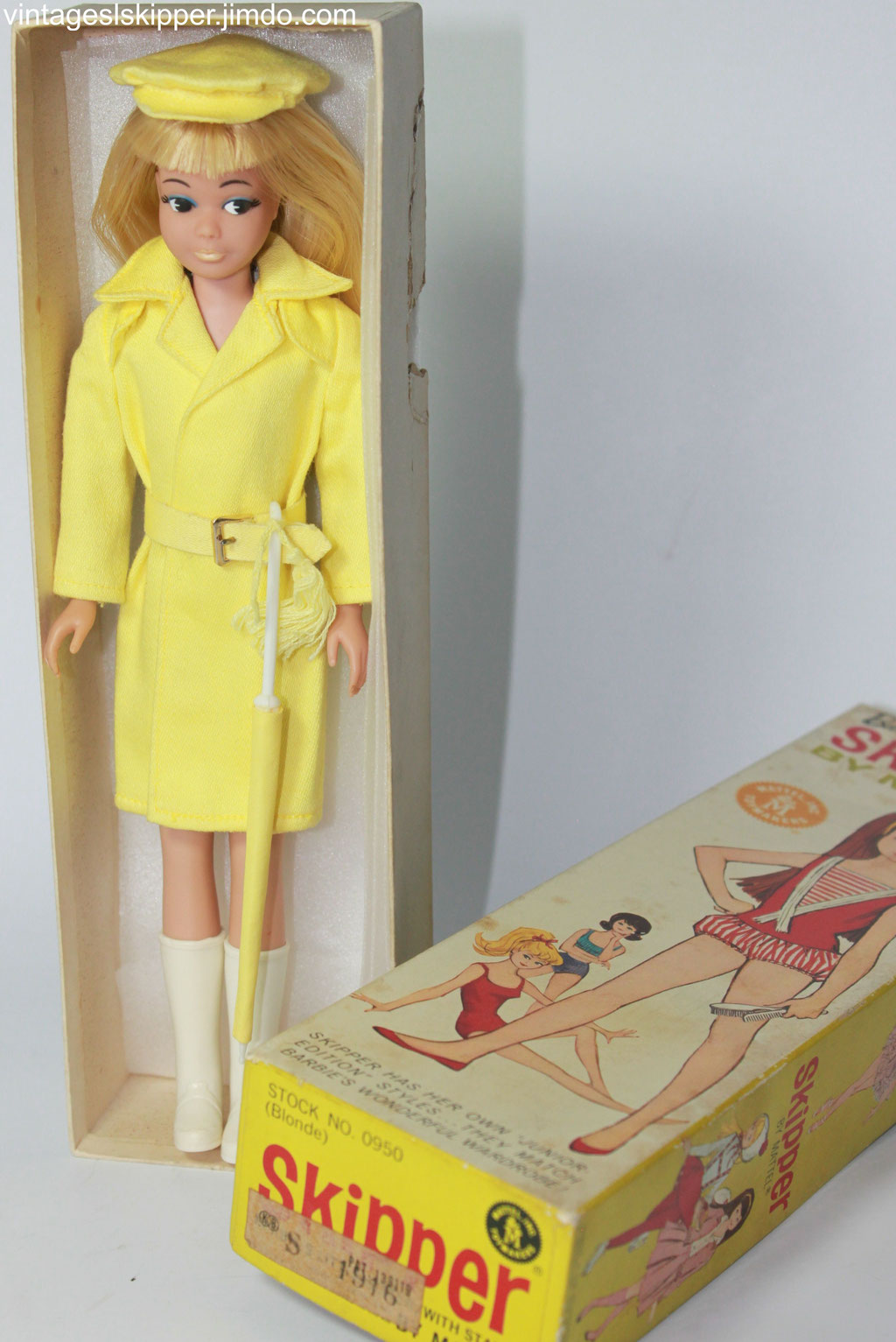 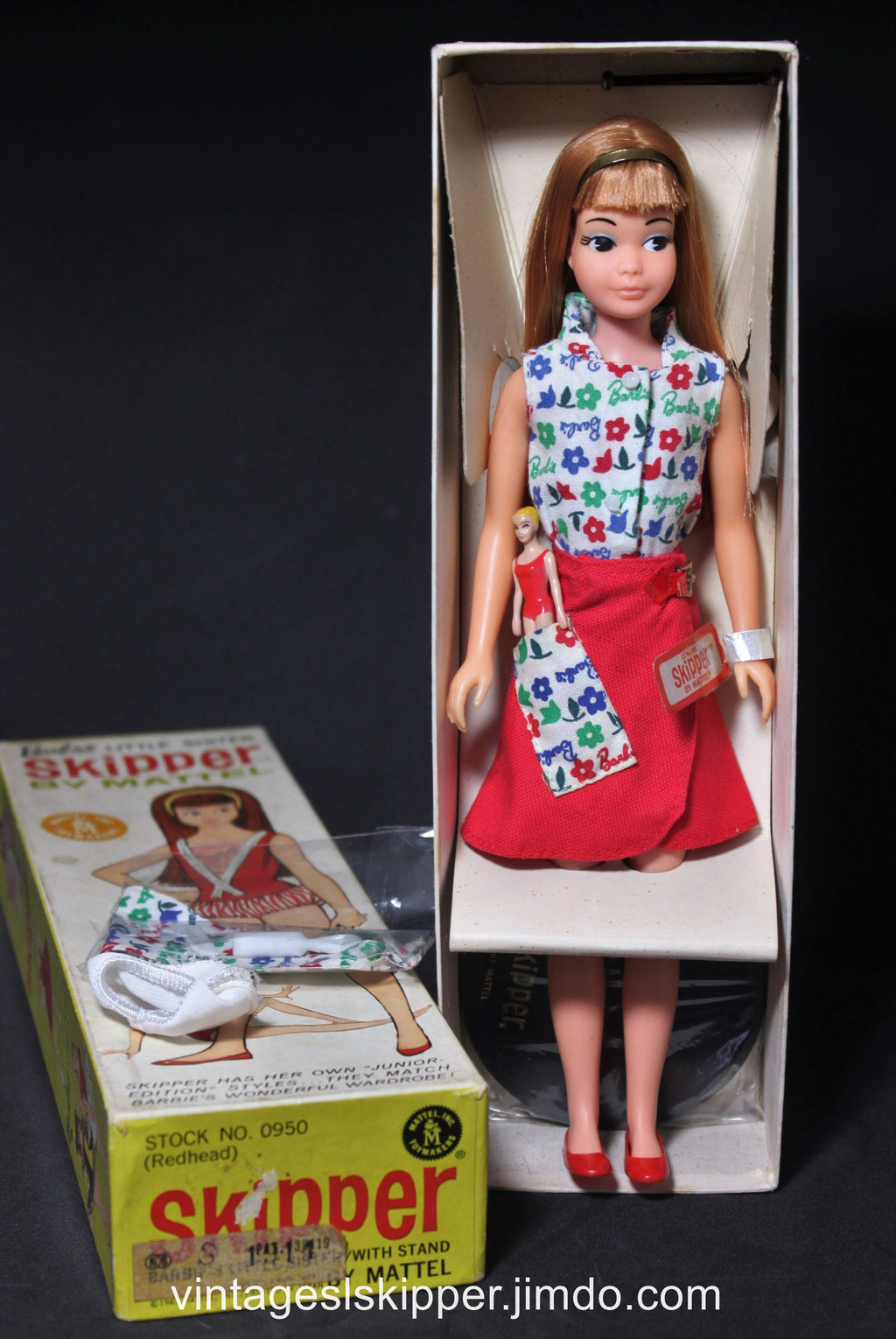 Japanese dressed doll in her own kimono:

Pictures from the Japanese Barbie booklet showing the dressed doll box fashions and the black stands that were included in the box: 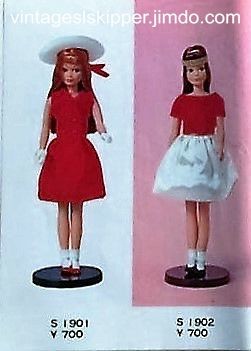 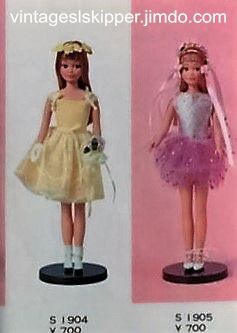 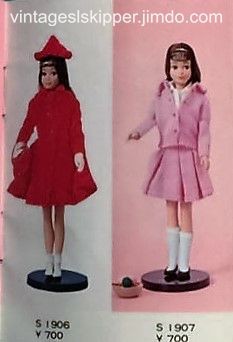 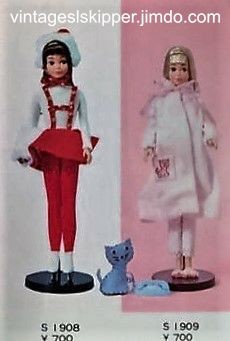 The Skipper Kimono #S2001 sold in the "Dressed boxes" was also available as a fashion set. This set contained a cream-white brocade kimono with gold cranes, a waist sash (obi) in two patterns (one pictured on the Japanese Barbie booklet, the other one was gold and red striped), a clutch purse or drawstring bag made of the same material like the kimono or with red and gold stripes, japanese sandals (pokkuri) and socks (tabi). Since this outfit is very rare, it is sold for very high prices.

There are (non-Mattel) reproductions of the Japanese Skipper kimono. Although the fabric is also a 60s kimono fabric used for dolls produced for the Japanese market by other companies, the fabric is not exactly the same like the original. The easiest way to find out if the kimono is a reproduction or an orgininal is by looking closely at the cranes. You can find a comparison further below.

The kimono is pictured in the Barbie booklet available in Japan:

Comparison of the original kimono fabric (to the left) and the vintage reproduction fabric:

Japanese Skipper dressed in a reproduction of the original kimono (the shoes are not original):

Yes, there are Japanese Skipper clone dolls! If you want to learn more about them, please follow this link to my 2nd webpage:

There were some later Skipper issues sold on the Japanese market only:

"The Sun Set Malibu Skipper" #1069 (1971 - 1974) was also sold as a Japanese issue in 1972 - maybe already in 1971. In Japan, she came with the same box and with the same accessories as the American version, with an extra sticker stating "Sun Sun Skipper" in Japanese.  She was almost identical with the Amercian version, but she had brown eyes and a dark brown scalp, brunette hair and rooted eyelashes. This doll is very, very rare. She's the most valuable of all Skipper dolls. 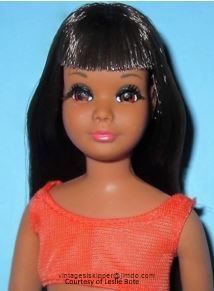 This Skipper doll had the same body as the regular Quick Curl Skipper (1973 – 1975) and quick curl hair in titian, blonde and brunette. Cho Cho Chan was sold exclusively in Japan - probably in 1974.

Butterfly Skippers were dressed dolls, they came in long dresses with butterfly wings. They shared the same head mold with Living Eli and Malibu Eli dolls of that time. Some Best Buy Outfits were available for Cho Cho Chan.

They had their own stock numbers and were usually sold on blister cards with Japanese writing.  However, a rare doll in a cardboard box was found (pls see pictures below). Butterfly Skippers are hard to find.

Rare variation of Cho Cho Skipper in a cardboard box (dressed in an outfit unique to this doll/not a Best Buy fashion):

Skip-Chan was sold in Japan in 1975 and 1976 as a dressed doll . She came in four different, untagged party dresses and unmarked flats. The outfits were only sold with this doll.

The stock numbers of the dolls were S1201, S1202, S1301 and S1302. Except for their pink skin  these dolls resembled the Malibu Skippers sold at the same time. They are hard to find. Marking:

The box was marked “Made in the Philippines and Japan”.