Growing Up Skipper #7259 was sold from 1975 - 1977. By rotating her left arm, she could grow and develop small breasts. Her original outfit is pictured on the left.

This Skipper only came in blonde (strawberry or pale blonde) and was sold in boxes containing a red headband and a booklet.

On the back of her box it says: "Cute, little girl!" and "Tall, curvy teenager".

Some fashions were made exclusively for this Skipper doll, usually containing one long and one short skirt or pants. (Some of them are shown on the page "Photo Gallery "Best Buy Era", "Get-Ups 'n go", "Growing Up Fashions" (1973 - 1978) fashions & dolls"".

Growing Up Skipper had a friend who shared the same body and face mold, but had brown hair and eyes. She was called "Growing Up Ginger". Ginger was sold in 1976 only and is much harder to find than Growing Up Skipper. For more info on Ginger please go to her page:

Other than you can read in the books I know of, there isn't just one marking for the Growing Up Skipper dolls. The body of the dolls also differ from each other. 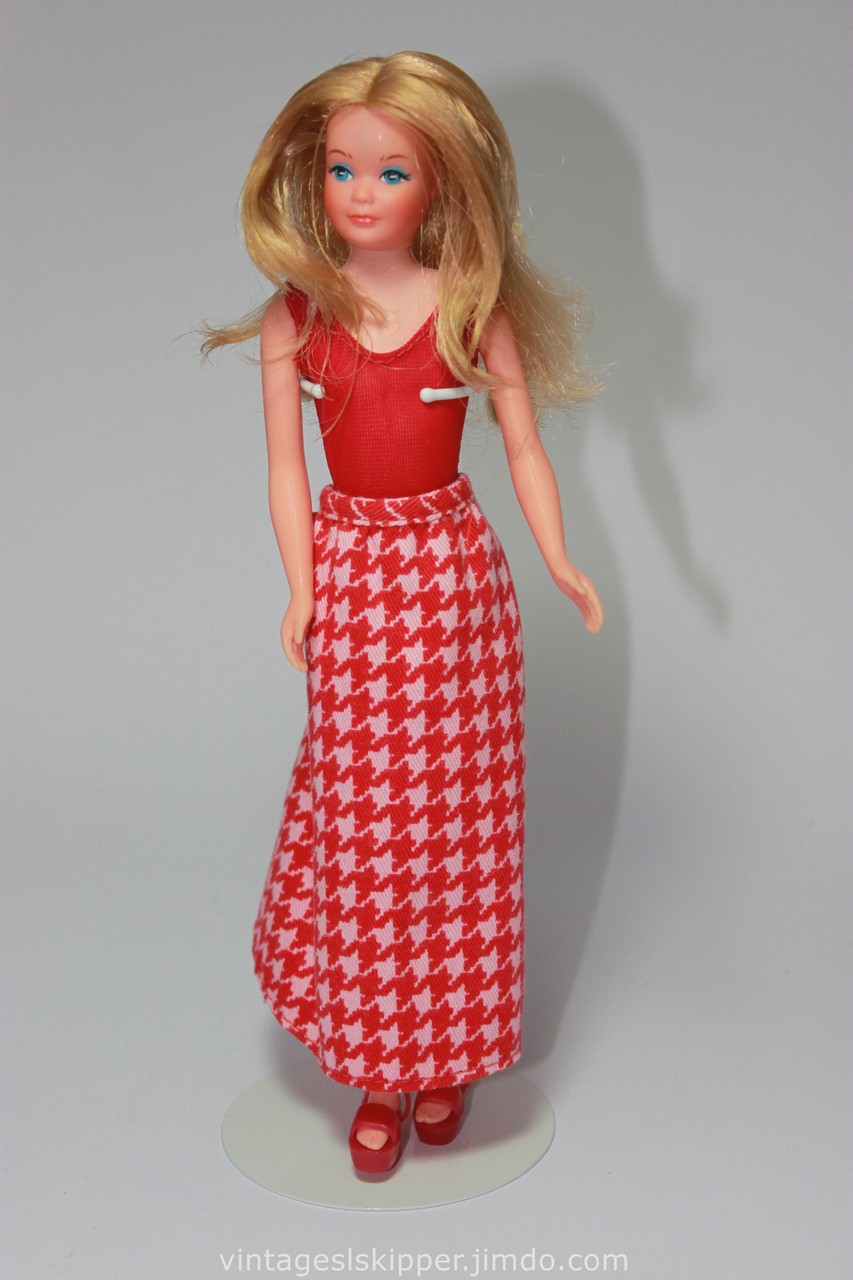 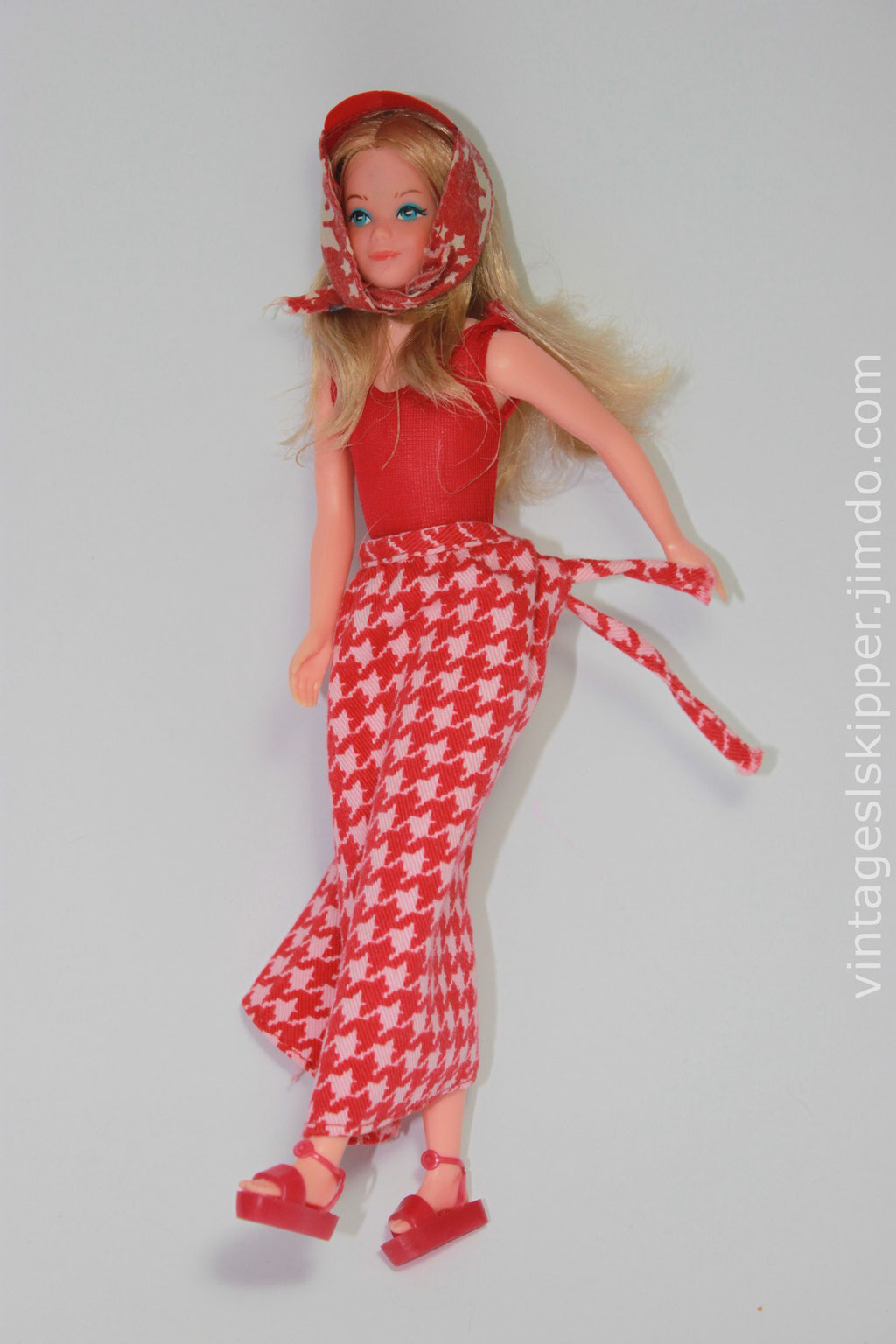 Growing Up Skipper dressed in part of her original outfit, wearing red plateau sandals made for her and a visor of unknown origin.

Above: Growing Up Skipper in "little girl" mode compared to the same doll in "Grown up" mode pictured below.

Back side of a "Growing Up Skipper" fashion.

There were bunk beds available for Growing Up Skipper and Ginger. Below there's a picture of an Italian booklet page, which shows two different designs. The text says: "Fabulous! Skipper and Ginger entering their very new bedroom: The lovely bunk bed transforms into an elegant bed with canopy, the desk table with chair, lampshade, books and notebook will become a beautiful make-up table with mirror. You will have two beautiful bedrooms in one to adapt to Skipper and Ginger growing with you as they become ladies! ":

In Germany, and maybe some other countries, a set with the same bed and other furniture was sold as a "Bedroom furniture" set #90-9365, showing a Deluxe Quick Curl Skipper (sold in 1976 and 1977). You can see a photograph on the "Quick Curl Skipper" page: 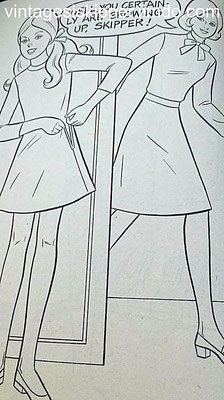 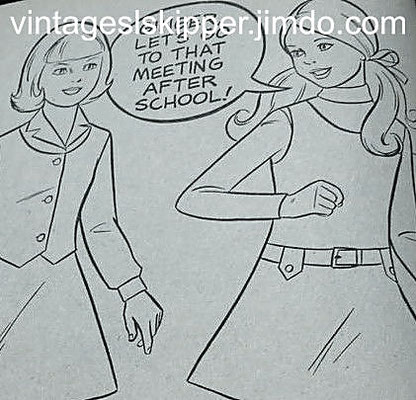 Graphics from a coloring book